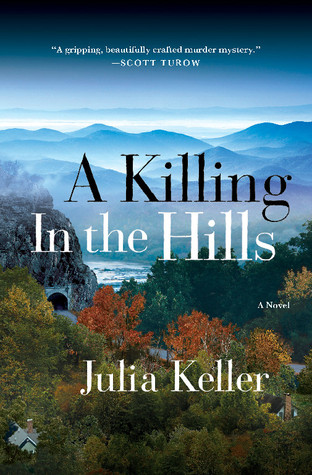 Dun-dun-dun-dun. Isn’t that just such a foreboding title? The title alone was actually what made me first notice this book (unfortunately I don’t remember if it was on a blog post or my random wanderings through the long halls of GoodReads). Then, oh hey! It’s set in West Virginia – which has a real soft spot in my heart, due to my absolute favorite childhood place being my great-grandparents’ farm there.

Unfortunately, I was ultimately disappointed with A Killing in the Hills, which was author Julia Keller‘s debut novel (2012). I’m torn between 2.5 and 3 stars out of 5. The issues I had with it were several and overarching and I was in a near-constant state of annoyance.

First. What the everlasting fuck does this author have against teenagers? Carla, the teenage daughter of Bell Elkins, is quite truthfully the flattest character I’ve encountered in a long time. It honestly feels like the author has a personal vendetta against teenagers and took it all out in her writing of Carla. It nearly made me DNF the book, it’s THAT bad. All the way down to her “flying thumbs” on her cell phone. Trust me, we’ve had quite enough of the cell phone cracks. Maybe she just doesn’t have experience with young adults and needed a stock list of characteristics. Sullen? Check. Irresponsible? Check. Drug experimentation? Check. Constantly on the phone? Check. Throwing snarky comments at Mom? Check. Ugh.

Second, I don’t see what the switching of POV to the killer (every few chapters) did for the story. To me you could have left out all those chapters and nothing would have changed. It was just…irritating. Jarring. Trying too hard to be scary.

Speaking of jarring…third problem. Bell’s back story, which is told in flashbacks, felt so familiar. Leftover. Used. Been there done that. The entire story is pretty darn predictable, but especially this part. It felt like the author was trying to be sensational or thriller-like, and in the process just borrowed pieces from popular books in the genre. Sigh.

So, why did I even finish it? I’m not someone who feels bad about tossing a book onto my DNF stack. Life is too short to waste on books that make me want to pull my hair out or have me rolling my eyes every 30 seconds.

The one thing Julia Keller is good at (and maybe I should have seen this coming, since her Pulitzer was for journalism) – is describing her setting. I could have sworn I was walking right down the main drag in my grandparents’ town, Backwoods, WV. Which also happened to be the county seat, just like this one. In fact, there were enough similarities to make me suspect she used their town as the model! Her similes are rather drawn out and overly wordy (see what I did there?), but in her place descriptions they are mostly bearable.

It was a shabby afterthought of a town tucked in the notch between two peaks of the Appalachian Mountains, like the last letter stuck in a mail slot after the post office has closed down for keeps.

Then there were some spot-on characterizations of the locals accompanied by lines here and there that did genuinely make my heart ache. But, sadly those moments were short-lived and few, and often accompanied by much telling as opposed to showing.

A lot of the people in Raythune County felt invisible. They felt marginalized, forgotten….Being on television, even if it was only to say, Yessir, we’re all pretty darned scared ’round here after that awful shooting’, no question ’bout it, might be the high point of their lives.

Overall…I can’t recommend this one, sadly. Not even in hopes of a sequel. I don’t have enough time to read as it is, and while I’m mildly curious as to what will happen to a couple of the characters in this book, I highly doubt that mild curiosity will ever overcome my massive TBR enough to bump the second of this series to the top. Which, somehow, has accumulated five books. I honestly don’t know how.

I’m taking the time to write this because I wasn’t just “meh” about it, I was massively disappointed. West Virginia and it’s people, with all the problems of drugs, unemployment, and violence, is very close to my heart and I feel it could have been given so much better treatment. Not to gloss anything over, but not to throw worn out sermons (re: drug use) at the reader either. Keller tried to convey the beauty and the pain of the place but ultimately I think the unoriginality of her plot and characters will be what stands out to most readers.