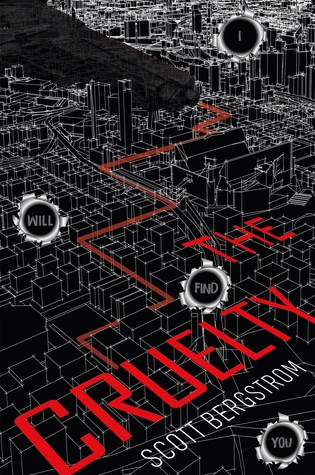 When her diplomat father is kidnapped and the U.S. Government is unable to help, 17 year-old Gwendolyn Bloom sets off across the sordid underbelly of Europe to rescue him. Following the only lead she has—the name of a Palestinian informer living in France—she plunges into a brutal world of arms smuggling and human trafficking. As she journeys from the slums of Paris, to the nightclubs of Berlin, to the heart of the most feared crime family in Prague, Gwendolyn discovers that to survive in this new world she must become every bit as cruel as the men she’s hunting.

This book has already had a lot of buzz, mainly because of the author’s condescending and inflammatory comments about YA in general. I have a LOT of thoughts on his comments and general attitude, but I tried – I really, really tried – to not let my view of the author color the book. I agreed to the review before knowing anything about all the drama, so I felt like that was only fair. Usually when I try a new author, debut or not, I don’t research a lot about the author. I like to let the book speak for itself. In the end, I feel like The Cruelty (Scott Bergstrom’s debut, releasing in February 2017) mostly did that. I ended up giving it 3/5 stars, in spite of feeling like the author himself probably deserves 2/5. Or maybe 1/5. Because really, sir, you are not special, your book is not going to revolutionize YA, and it’s definitely not going to dazzle long-time readers of the genre. Also, sidenote: even though you’ve already made enough money to be able to quit your advertising executive career, you might want to work more on networking with your fellow writers instead of alienating and insulting them. But enough about Scott Bergstrom. After all, a lot of creative people lack social skills and if their work is dazzling enough we excuse them for it, right? Anyway, that was how and why I approached reading this book. Sadly, overall I felt like Mr. Bergstrom is not genius enough to be excused for his behavior.

So, the positive: the pacing is really spot on. I whizzed through this in a single afternoon/evening. There’s none of the stream-of-consciousness dwelling that bogs down some YA books. Even though there were aspects of the writing and characters that bothered me, I was interested enough in the plot line to ignore everything else I had planned for the day and read it all in one go. Also, the ending left me with enough questions (while not being a true cliffhanger) that, had the sequel been available, I would have picked it up right away. That in itself added the extra half star to me. The suspense and anticipation is definitely the most well-written thing about this book.

The story takes place in several different countries. In my experience, you can almost always tell when an author is writing about a locale they’ve never personally seen or lived. It just rings false or like they’re ticking off a list, and having lived abroad myself I notice it more than I ever did before. Now, I haven’t been to all of the countries Gwen visits and don’t claim to be any kind of expert, but the descriptions feel very real. I think that Bergstrom has probably visited these countries or he researched very, very well.

Now for the negatives. I’m going to try not to rant on and on about these…but who am I kidding, I’m probably going to rant.

The book starts off REALLY rocky. I almost DNFed it at page 15. We start off with the special snowflake trope (OMG, she speaks French! even thinks in French and accidentally blurts it in class! oops!), followed by much angst. Sigh, page turn, and then –

I pull a book out of my backpack and lean against the door as the train shoots through the tunnel under the river toward Queens. It’s a novel with a teenage heroine set in a dystopian future. Which novel in particular doesn’t matter because they’re all the same. Poor teenage heroine, having to march off to war when all she really wants to do is run away with that beautiful boy and live off wild berries and love.

Let’s start off by throwing rocks at dystopian YA!! Yay!! Because we’re not writing almost the EXACT SAME type of book and calling it special, are we, Precious? *insert much eyerolling* I’m not even that much a fan of the dystopian type books! What I’m NOT a fan of, is generalization – and buddy, you just hit every student in the room with your spitwad. And this wasn’t even the point of the almost DNF.

Guys out on the sidewalk in front of the shops whistle and catcall after me. They love this – the school uniform, the flash of seventeen-year-old legs.

What the…? I mean…who even talks or thinks that way? It seems totally out of place in the current context and setting, and is just such a jolt of stupid and bad writing that I came *this close* to throwing the book across the room and doing something else with my afternoon. However, I continued. Mostly because I wanted to see if it could really be THAT bad. There were a few similar instances, like this one:

He uses as his tools reason and facts, a whole orchestra of them. But in the end, they bounce off the armor of my stubbornness.

Not quite on the same level as the seventeen-year-old legs quote, but close. Most of the female-specific points or themes in this book sound utterly redonkulous. Like a seventeen-year-old boy was trying to imagine how girls think. Big fat fail. The body image comments really grated on me…like somehow, when the book begins, we’re supposed to see Gwendolyn as overweight…I think? Only she’s an overweight gymnast, which totally makes sense. Also she doesn’t like being looked at but dyes her hair bright red…and then in the grand scheme of changing herself so she can go hunt for her father she has to dye her hair a more unnoticeable shade and become this lean, muscled, martial artist type. Well, I have news for you…that shit doesn’t happen overnight, and not even in the several weeks Gwendolyn has to work on it. If she’s indeed overweight/out of shape as it seems we’re supposed to believe. I don’t know. I’m confused as to what the perception there was supposed to be.

Then, the love interest is lame. A plot device. Gwendolyn needs an ally back home, one with smarts, money, and connections…and suddenly she’s all weak-kneed for this boy she’s barely even looked at before. There was no buildup, just suddenly she runs into him and starts shaking. Sorry, but I have no feels for this at all.

Actually, I pretty much have no feels at all for the entire story, which is really sad. I mostly feel annoyance. I wanted more from the characters. Characters are easily the biggest and most important part of a book, to me. Gwendolyn, her father, even the people that help her, just aren’t generally likable and while yes, Gwendolyn definitely changes through the book, I found the changes a bit far-fetched. She morphs rather quickly from a slightly bitter, spoiled high school girl to a lean, mean, killing machine. Really? But, ok. I’m willing to suspend disbelief a bit – after all, that’s what we do for any book, right? But it’s the author’s job to sell us on it. Sadly, the writing style is such that I couldn’t STAY suspended in my disbelief. I was repeatedly jarred out of it. But I still wanted to know what happened. How’s that for a quandary?

“Justice isn’t some abstract thing, Gwendolyn. What your did tonight, that’s what it looks like. Ugly and mean.”

Best line in the entire book, I swear. And it does get ugly, the longer it goes on. It’s like a train wreck you can’t stop watching, as Gwendolyn delves deeper and deeper into the criminal underworld in her search for her father. She develops an amazing poker face and some steel nerves, even in the face of a rising body count and discovering a sex trafficking ring – somehow she manages to stay cool. But at what cost? That’s the real question, and in the end, the question of what was saved and what was lost is still somewhat up in the air.

Many thanks to Feiwel & Friends for sending me an ARC in exchange for an honest review!