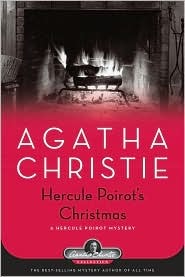 Simeon Lee has demanded that all four of his sons and their wives visit the family home for Christmas. But the cantankerous patriarch has anything but a heartwarming family holiday in mind when he announces that he is cutting off his sons' allowances and changing his will. So when the old man is found lying in a pool of blood on Christmas Eve, there is no lack of suspects. Hercule Poirot suspends his holiday sorting through the myriad of suspects and motives to find the truth behind the old man's death.

As it’s December 25th, it seems very appropriate to review Hercule Poirot’s Christmas today! Of course helped by the fact that I read it over Christmas Eve. 😉 Regardless of what holiday you celebrate, I hope this holiday season has found you surrounded by light and love.

It’s no secret that I love Agatha Christie’s works. I read the majority of them when I was in my last years of high school and first couple of years of college, so it’s been awhile. I fully intend to re-read and finish reading the entirety of her work at some point…but as always, there are SO MANY books just clamoring for attention! Anyway, as this one was sitting on my shelf and it was almost Christmas, I thought it was perfect timing for a re-read. Especially since, no matter how I tried even after reading the synopsis – I could not remember a damned thing about the resolution of the plot. Not a thing. Hehe.

Sidenote on a pet peeve of mine: Christie’s novels are NOT historical novels. While to modern readers they appear so, when they were originally published – in this case, December 1938 – they were modern detective novels.

All the Hercule Poirot novels can, in my opinion, be read as standalones. That said, this is considered (at least by GoodReads) to be the 20th Hercule Poirot novel. As such it definitely will appeal MORE to those who have already become attached to the little Belgian detective. To my knowledge he is the only repeat character in this book.

As the title would lead you to expect, the plot centers around Christmas. A crotchety but very rich old man “invites” all of his children to attend him during the holiday, and as so often does during family gatherings, tempers flair. As Hercule Poirot observes,

“Families who have been separated throughout the year assemble once more together. Now under these conditions, my friend, you must admit that there will occur a great amount of strain. People who do not feel amiable are putting great pressure on themselves to appear amiable! There is at Christmas time a great deal of hypocrisy, honorable hypocrisy, hypocrisy undertaken pour le bon motif, c’est entendu, but nevertheless hypocrisy!”

So it is, and in typical Christie fashion from the very beginning of the writing we are unsure who we can trust and therefore suspect everyone except Hercule Poirot himself. In the very beginning, the hairs start to raise on the back of the reader’s neck as various characters make very suspect statements. Everyone seems to incriminate themselves somehow. Add to that certain people start quoting Lady Macbeth and suddenly it’s not just the reader who doesn’t trust anyone!

Yet who would have thought the old man to have so much blood in him? – Macbeth

For such a short book, the characters are remarkably drawn out. None of them are flat, though some are recognizable as types from Christie’s other books. Even the side characters and ones that we suspect, have a vulnerable side that makes the reader second-guess any suspicions.

He said, “I see.”
She said sharply: “What do you see?”
He answered: “I see that you have had to be a mother to your husband when you would have preferred to be a wife.”

The hair-raising feeling does die down about two-thirds of the way through the book. I’m guessing perhaps Christie didn’t want to make a holiday book TOO terribly bloody and creepy, perhaps? Really though I was just SO CONFUSED I didn’t know what to think, right up until the end. And then of course once the reveal happened, everything had been staring me right in the face.

Overall, 4/5 stars. I would have liked a bit more of the skin-crawling, hair-raising bit, but it was still a fantastic book!