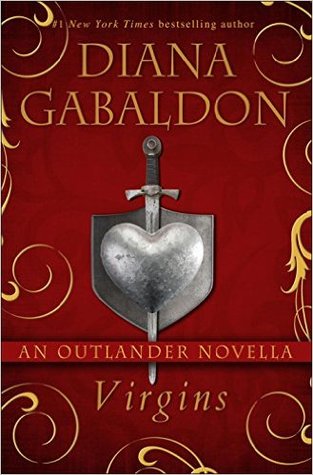 Mourning the death of his father and gravely injured at the hands of the English, Jamie Fraser finds himself running with a band of mercenaries in the French countryside, where he reconnects with his old friend Ian Murray. Both are nursing wounds; both have good reason to stay out of Scotland; and both are still virgins, despite several opportunities to remedy that deplorable situation with ladies of easy virtue. But Jamie’s love life becomes infinitely more complicated—and dangerous—when fate brings the young men into the service of Dr. Hasdi, a Jewish gentleman who hires them to escort two priceless treasures to Paris. One is an old Torah; the other is the doctor’s beautiful daughter, Rebekah, destined for an arranged marriage. Both Jamie and Ian are instantly drawn to the bride-to-be—but they might be more cautious if they had any idea who they’re truly dealing with.
Note: Originally published as part of the Dangerous Women anthology.

It feels like it’s been FOREVER since I posted an actual book review! Last week was all about ALL the reading challenges, hehe. I’m excited to get back into the groove. So without further ado, I present my review of The Virgins, by Diana Gabaldon.

The Virgins felt short-story in length to me, though I think it’s actually classified as a novella. I read it in less than an hour though, so…maybe I just read fast? The hardcover addition available from The Book Depository is 256 pages…which I don’t understand since my e-book version was only 86 pages! HUGE difference there and I feel slightly cheated, but it doesn’t seem that there’s actually a difference in content. HOW.

I was so happy to be back with Jamie and Ian! Seeing them before Claire came to Scotland, and seeing Jamie so soon after all the horrific events that we only see in flashback in the the full length novels, was both heartrending and exciting. I also really enjoyed that this story was just straight-up historical fiction, no woo-woo added. Not that I haven’t enjoyed those aspects of the novels, but this was just the down and dirty, the nitty-gritty. Even for such a short story, I was totally invested back into the characters and their world.

Jamie and Ian are SO YOUNG! They distinctly remind me of my own 17-year-old brother in the way they react to some things. This is Jamie before he became the confident, skilled warrior we meet in Outlander. This is Ian before Jenny. This is both of them as complete virgins in every sense of the word, and they are gregarious, lovable, and heartbreaking. Also cringe-worthy at a few points. I swear I can almost smell the teen-boy sweat coming off of them.

The secondary characters here are interesting and colorful, but I didn’t get attached to any of them. I was rather hoping someone would drive a dagger through a certain female person’s heart, but alas. Despite my non-attachment, I was devastated after a particular scene near the end. Not so much because of who died, but because of how it affected Jamie.

The main line of the plot doesn’t become apparent right away. First, we’re thrown into Jamie and Ian’s meeting almost immediately after Jamie’s escape from Black Jack Randall. This, I think, is where it becomes apparent that this story is not to introduce a reader to Outlander. This story is for the fans. I loved it, naturally. However, the actual plot starts off a bit slow. Does it work? Yes. But I think it was secondary to showing us a young Jamie and Ian and just how they actually thought of each other.

“Did ye not mean to go to Confession yourself?” Jamie asked, stopping near the church’s main door. There was a priest in the confessional; two or three people stood a discreet distance away from the carved wooden stall, out of earshot, waiting.

As usual, Diana’s writing appears to be impeccably researched. I’m not a historian, but the amount of detail and care is obvious.

Overall, I’m giving 4 stars. I do think part of my rating is due to HOW MUCH I love these characters. The writing itself doesn’t seem quite as polished as in the books, but it’s difficult to lay a finger on what gave me that impression. Especially in the beginning, some things felt just a little bit forced. Once everything got started it moved along smoothly, and as usual Gabaldon is a fabulous storyteller. I would recommend reading immediately after the original Outlander, but it would be perfect for Outlander fans at any point in the series!