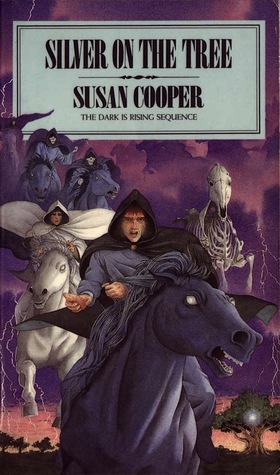 The final volume of Susan Cooper's brilliant and absorbing fantasy sequence known as The Dark Is Rising.

The Dark is rising in its last and greatest bid to control the world. And Will Stanton--last-born of the immortal Old Ones, dedicated to keeping the world free--must join forces with his ageless master Merriman and Bran, the Welsh boy whose destiny ties him to the Light. Drawn in with them are the three Drew children, who are mortal, but have their own vital part in the story. These six fight fear and death in the darkly brooding Welsh hills, in a quest through time and space that touches the most ancient myths of the British Isles and that brings Susan Cooper's masterful sequence of novels to a satisfying close.

Notes on the audio version:

Alex Jennings narrates the last of this 5 book series, and I was very glad to have him back as a narrator! I’m not sure why they switched on book 4, and while that narrator was fine, I like continuity. That said, the audio QUALITY on this version was ATROCIOUS. It’s been digitized from cassette tape, I’m almost positive, and it was absolutely horrible. As soon as I started it I knew I was going to struggle through it because it just sounded old and a bit crackly. Ugh.

I’ve read this entire series by audiobook, and while I enjoyed it, I really think I need to go back and read them as books. Sometimes I would have gaps of days in between my listening within a book, and gaps of weeks or even months between the books themselves, so I got a little confused. The whole series seems a bit un-explained, to me, and I’m really kind of perplexed that I couldn’t get as into it as so many other people. I didn’t like the way the point of view jumped back and forth between the Drew kids and Will, I didn’t like the way the “magic” was never fully explained (at least not to my satisfaction), and I didn’t like the characters themselves much! I was especially affronted by how the female characters are either air headed (Jane) or magical. Why is this series considered to be so brilliant? I really feel like I’m missing something.

Despite that, I stuck it out for the entire series and was fascinated by the setting of Wales and England. I think that, given how short the books are, I will go back and re-read them at some point. I think maybe all my gaps in reading effected my comprehension of the plot. I really don’t think anything can rescue the characters though.

This one counts into my Audiobook Challenge 2017, my 75 in 2017 GoodReads challenge, and my Beat the Backlist Challenge! 😀