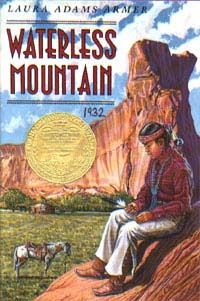 Winner of the 1931 Newbery Medal, this is an authentic novel about an eight-year-old Navaho boy's training as a medicine man. This deeply moving and accurate account of one young Navaho's childhood and spiritual journey is filled with wonder and respect for the natural world--a living record of the Navaho way of life before the influence of the white man.

This is my first Newbury Award winner of the year! I need to get on this challenge, I’m already behind! So here’s my quick little review of Waterless Mountain, by Laura Adams Arner.

My first issue: I feel like that description or blurb is very misleading. “A living record of the Navaho way of life before the influence of the white man.” Um…I don’t see how that is accurate at ALL, when several of the main incidents of the story involve a slightly condescending but kind white man who runs a general store near the Navajo family. So what exactly is that blurb about? Hmmmm? Anyway.

This book was first published in 1931. The style of writing reflects the time, as it’s very slow-paced and nothing at all like the fast moving, action packed chapter books and MG novels of today. It’s thoughtful. There isn’t very much dialogue. I think that most middle grade readers today would lose interest, sadly. The subject matter is fascinating, but it’s not really presented in the most fascinating way. :-/ There’s a brief conflict that doesn’t even begin until the book is more than halfway over, and even that is resolved almost immediately and when it is, it just happens off somewhere else and Younger Brother (the main character) isn’t even involved!

The characters are not really fleshed out very well at all. I liked Younger Brother’s way of looking at the world, of his respect for all nature, of his desire to communicate with it, but I felt like the rest of the characters were very two dimensional and rather stereotypical.

Supposedly the view on Navajo culture presented in this book is pretty accurate – according to some white scholars in the 1930s. The book is written by a white woman. Which is all fine – you don’t have to be a member of a nationality to write about it – but I think the #ownvoices movement has sensitized me somewhat to people outside a culture writing about it, and I really object to the covert racism here. For instance, when the Navajo family makes a trip with the white store owner, to another store, the narrator says that “his father was curious but dared not go outside the door.”

I think the Newbury Award judges were trying to expand children’s view of the world by even selecting a book that portrayed Navajo culture in a positive light. I really do. However. Most white people at the time weren’t even…aware isn’t the right word. Racism at that time wasn’t looked at as anything particularly wrong, it just WAS. That doesn’t make it any more excusable, but from the point of view of a white intellectual in the 1930s, this book was probably a shining example of equal opportunity. So that said, I wouldn’t really recommend this for modern classes or kids, except as maybe an example of how racism creeps into even well-intentioned (?) writing. With all that going on I found it a little difficult to find things I liked about the writing, even if there was nothing particularly wrong with the style.

“I know this much, Little Singer. There are secrets we cannot name, songs we cannot hear, and words we must not speak.”

I did really enjoy how Younger Brother has such a respectful connection with nature. It’s not just him, but the rest of his family as well. At one point the narration mentions how even the youngest child isn’t afraid of bees, because she has never learned to be afraid of them. This was a real lightbulb for me. How many times are we afraid of something because we have seen someone else express fear?

Overall, 2.5/5 stars. When I initially finished I felt a little more forgiving, but the longer I think about it the more irritated I become by all the issues, especially the racism masquerading as not racism.