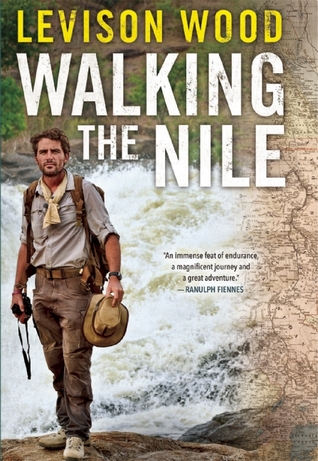 The Nile, one of the world’s great rivers, has long been an object of fascination and obsession. From Alexander the Great and Nero, to Victorian adventurers David Livingstone, John Hanning Speke, and Henry Morton Stanley, the river has seduced men and led them into wild adventures. English writer, photographer, and explorer Levison Wood is just the latest. His Walking the Nile is a captivating account of a remarkable and unparalleled Nile journey.
Starting in November 2013 in a forest in Rwanda, where a modest spring spouts a trickle of clear, cold water, Wood set forth on foot, aiming to become the first person to walk the entire length of the fabled river. He followed the Nile for nine months, over 4,000 miles, through six nations—Rwanda, Tanzania, Uganda, South Sudan, the Republic of Sudan, and Egypt—to the Mediterranean coast.
Like his predecessors, Wood camped in the wild, foraged for food, and trudged through rainforest, swamp, savannah, and desert, enduring life-threatening conditions at every turn. He traversed sandstorms, flash floods, minefields, and more, becoming a local celebrity in Uganda, where a popular rap song was written about him, and a potential enemy of the state in South Sudan, where he found himself caught in a civil war and detained by the secret police. As well as recounting his triumphs, like escaping a charging hippo and staving off wild crocodiles, Wood’s gripping account recalls the loss of Matthew Power, a journalist who died suddenly from heat exhaustion during their trek. As Wood walks on, often joined by local guides who help him to navigate foreign languages and customs, Walking the Nile maps out African history and contemporary life.
An inimitable tale of survival, resilience, and sheer willpower, Walking the Nile is an inspiring chronicle of an epic journey down the lifeline of civilization in northern Africa.

Walking the Nile is one of the few nonfiction books I’ve read this year. Generally speaking, nonfiction doesn’t hold my interest very well, but adventure, travel, and some memoirs are the exception. This book is all three, and it was so very interesting. I borrowed it from my library on a whim, seeing it on their “new arrivals” shelf (even though it was published early 2016).

For as long as I can remember, I had wanted to embark on an epic journey, one that harked back to the great expeditions of times past, a journey that would test me both physically and mentally in a way that no other could.

Levison Wood is an explorer. By his own admission, he has a perpetual case of wanderlust, traveling at every opportunity and never settling down. Quite the exciting life! This time his itchy feet take him to Africa, to an idea that has grown to an obsession: to walk the length of the Nile, from it’s (debated) source, to its end.

This book is much more than a backpacking story. It’s the story of one man seeing Africa through his first-world eyes, and coming to realize that when a person is still fighting just for daily survival, they cannot be concerned with his first-world piety. At one point, while trekking through Uganda, he writes:

In the Mabira we’d seen 500-year-old trees sawn down at a rate of ten a day by teenagers who’d been paid three dollars by the landlord. This was big money for a poor villager, and with the economics of the industry working like that, what hope was there for convincing local Ugandan people to leave the forests alone? It’s all well and good preaching the wonders of conservation, but not to men with families to feed and roofs to keep over their heads.

Wood is obviously pained to see this scenario played out again and again. He admits to not having the answers. He listens to the arguments of native Africans who decry his comments about the destruction of Africa’s great wilderness and lands.

“You whites cut down your forest hundreds of years ago,” he said. “You had your industrial revolution, and when you needed wood you took it. Well, now we need ours. We need to plant crops to feed our children, and plant sugar so you can feed yours whatever shit you feed them.”

The books doesn’t dwell on these issues for the entirety, however. Wood is moving along his 4,000+ mile journey, through such varied terrain and countries that at times even reading about them makes your head spin. While the adventures of explorers like David Livingston are obviously close to his heart, at first he doesn’t seem to entirely feel the dangers of his modern day exploration. That changes however, when he is joined by a couple of journalists partway through the journey and one of them shockingly and suddenly succumbs to heat stroke. Prepare your tissues.

Actual danger for Wood himself escalates in the last half of the book, as Wood is (understandably, perhaps), detained and accused of being a spy in South Sudan. This is not the Western world. This is Africa. Rules do not apply. Eventually, Wood ends up changing his plans slightly to avoid the civil war.

All in all, this was an amazing book that only intensified my own desire for travel. Africa seems even more terrifying after reading it, but Wood’s descriptions of the people of Africa make it more approachable and more real than anything else I’ve read. My only complaint is that about 1/3 of the way through, it did seem to slow down a lot and get a bit mired down (much like that actual part of Wood’s journey). I pushed through it though, and was immensely glad I did!