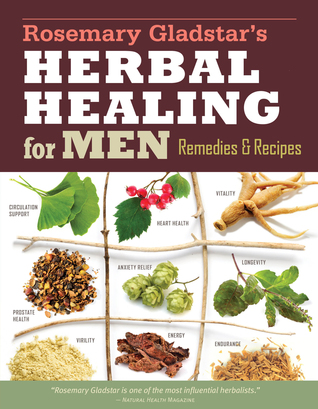 Herbs for Men's Health: How to Make and Use Herbal Remedies for Energy, Potency, and Strength by Rosemary Gladstar
on July 11th 2017
Genres: Nonfiction
Pages: 224
Buy on Amazon

This book is a slight departure from my usual reviews, but I was so excited to be able to read this book as an ARC! I have long admired Rosemary Gladstar’s other herbal remedy/medicine books, and as my husband was recently diagnosed with some health problems I was eager to see what things might be out in the herbal world more specifically for him. As Rosemary notes in her opening, most herbals focus on women MUCH more heavily than men, and in general you run across more women in alternative medicines and fields.

The book covers many topics of interest to men, including of course virility, prostate issues, memory functions, heart health, and many others. It is much more in depth than Rosemary Gladstar’s Medicinal Herbs: A Beginner’s Guide (naturally), but it “matches” the cover very nicely! I’ve pre-ordered a copy. The photography is PHENOMENAL. Seriously, I would buy it just for the pictures. There are recipes and case studies, but while Rosemary alludes to scientific studies, I couldn’t find any actual citations for them in the book. If you’re researching this kind of thing, you’re probably already aware of the sad state of affairs when it comes to scientific studies of natural/herbal healing and medicine, so perhaps this is not surprising, BUT I would have greatly appreciated better end notes and citations. Things like that are very important, as many doctors and the general public are still convinced that the only positive influence anything other than a pill has on a person is due to the placebo effect. Rosemary Gladstar and (obviously) many other herbalists, whether professional or amateur, believe otherwise…but it is not enough to believe, and in the scientific world case studies alone are not enough evidence. Due to the lack of notes, I knocked off one star. However, if you have done your research elsewhere this is an awesome book to add to your shelf for the dozens of recipes and suggestions within, whether you’re male yourself or you have men in your life that you love and care for. Be well!

P.S. This was originally supposed to be released on May 31, 2017, but now GoodReads has the release date as July 31 so I’m confused.

Many thanks to the publisher and NetGalley for an ARC for review. My opinions were not influenced in any way.