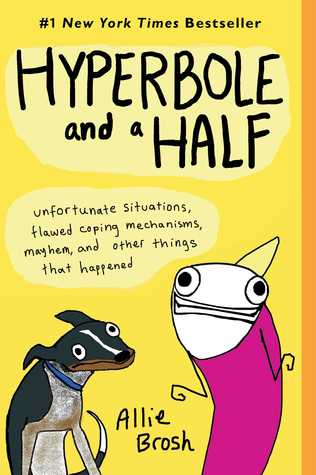 Hyperbole and a Half: Unfortunate Situations, Flawed Coping Mechanisms, Mayhem, and Other Things That Happened by Allie Brosh
Published by Touchstone on October 29th 2013
Genres: Graphic Novel
Pages: 371

This is a book I wrote. Because I wrote it, I had to figure out what to put on the back cover to explain what it is. I tried to write a long, third-person summary that would imply how great the book is and also sound vaguely authoritative--like maybe someone who isn’t me wrote it--but I soon discovered that I’m not sneaky enough to pull it off convincingly. So I decided to just make a list of things that are in the book:

*These are lies. Perhaps I have underestimated my sneakiness!

Someone gifted me this book in APRIL! I read it almost immediately, but between having ALL sorts of feelings about it and the move, I never put up a review. Obviously it’s been hugely popular (131,295 ratings on GoodReads!), but it just wasn’t on my radar due to my general dismissal of graphic novels. Then I read Marissa Meyer’s Wires and Nerve in January (also never reviewed) and became OBSESSED with them! I still have only read a handful but I have SO MANY on my list now. But I digress. Presenting my long overdue Hyperbole and a Half review!

Hyperbole and a Half is hilarious and immensely relatable. IMMENSELY. Allie is clearly a nerdy, bookish, animal-loving introvert, and so many times I felt like the book was ABOUT me. Sidenote: I had no idea this was where the phrase “ALL THE THINGS” originated, despite it being one of my favorites! I laughed until tears ran down my face, and then a little bit later I actually cried, because I couldn’t believe someone else actually felt the way I had the last year or so. I took pictures of the pages to send to my best friend, because I hadn’t been able to explain to anyone how I felt, and this book had just done it.

How did she articulate that so well? I could have written that myself if I could have just figured out how. She goes on to briefly mention that she discovered she was not the only one who felt this way, that while not a healthy state of mind, it did not make her weird or an outcast, even if it felt like that. She obtained help for her depression and went on to feel like her usual self again, able to enjoy her relationships and her dogs. She doesn’t dwell on it, and the book moves along to happier, more hilarious scenes…but this is what really stuck out to me and earned this book a permanent place on my shelf and will have me recommending it to every introvert kindred spirit, ever.

Allie Brosh ahas been disappointingly silent in the past couple of years, with nothing else released that I could find. But, as a fellow introvert, I get it. I do hope she comes back, but she deserves her privacy for her own mental health and her life. 🙂 In the meantime, you can read through all her old comics here, and she her most recent media interview seems to be this YouTube video from Will Wheaton (wait, what? He’s not just a Big Bang Theory construct??).

Tags: allie brosh, depression, graphic novel, hyperbole and a half