So, story behind this review. My dear husband is a wonderful man who is very supportive of my reading and book buying habits – but he doesn’t read himself, at least not for enjoyment. The other day we were in Books-a-million (the only town I’ve ever been in with one of those that was still open for business), and he randomly asked me if I’d ever heard of a book called “The Cay.” I hadn’t. He said it was one of the last books he remembered reading, because he had to read it in 6th or 7th grade for a class in school. I was a bit shocked that there was a book on a school reading program that I hadn’t read,  so naturally I had to go looking for it. Lo and behold, they had a little Yearling paperback copy and it came home with us. 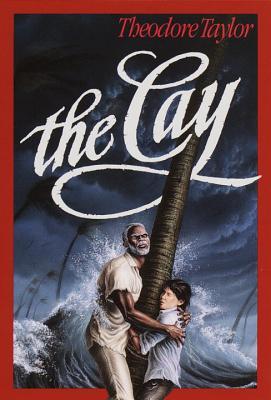 The Cay by Theodore Taylor
Published by Yearling on May 28th 2002
Genres: Children's Lit
Pages: 144

Phillip is excited when the Germans invade the small island of Curaçao. War has always been a game to him, and he’s eager to glimpse it firsthand–until the freighter he and his mother are traveling to the United States on is torpedoed.   When Phillip comes to, he is on a small raft in the middle of the sea. Besides Stew Cat, his only companion is an old West Indian, Timothy. Phillip remembers his mother’s warning about black people: “They are different, and they live differently.”    But by the time the castaways arrive on a small island, Phillip’s head injury has made him blind and dependent on Timothy.

I wasn’t at all sure what to expect going into this. I’d never heard of the book or the author despite it apparently being a “children’s classic” (??), but Gary Paulsen (didn’t we all read Hatchet?) wrote the introduction so I thought it surely couldn’t be too bad. I was super skeptical though, on reading the blurb…I mean, it’s clearly meant to be a demonstration of how we are all PEOPLE above whatever color our skin is, but I was concerned that a book written in 1969 might not be as socially aware as it was thought at the time of publication.

It was an entertaining enough  little story, if a little slow at times. The style is a little dated, and I think modern kids might get bored (my husband said it was a slog for him), but an avid reader would breeze through it. I’m still a little on the fence as far as the representation. Timothy, the black man who saves Phillip from the sinking ship, is West Indian and repeatedly described as ugly – it does seem that most of his ugliness in Phillip’s eyes is due to his age, though whenever Philip has a disagreement with Timothy he blames it on Timothy’s race. At first he agrees with his mother’s statement on black people, “They are different and they live differently. That’s the way it must be.” Gradually however, he changes his mind as he actually gets to know Timothy and Timothy cares for him week after week. It was definitely predictable, but the addition of Stew Cat was sweet and I loved how he and Philip were such good buddies.

Timothy’s dialogue is ALL written in dialect, something that is not only (in my opinion) annoying to read but also tends to belittle the character speaking the lines. I understand it can and is sometimes only used as a device to help the reader imagine the way a character sounds – after all, there are a lot of different accents in the world – but it’s an older device and has fallen out of favor due to the frequent implication that the person is inferior in some way. Also, its use makes it more difficult for some of the intended audience to comprehend the dialogue.

The dialect issue was probably my biggest one with the book, since by the time the resolution comes Philip has entirely revamped his view of black people (and we hope, of anyone else different from him). I was also bothered by another aspect of Timothy’s story, but can’t really discuss it without spoilers, so….I’ll just leave it at that.

Overall, it was an okay book. I think there are much BETTER books on the market now, that would suit the purpose of helping privileged kids see outside of their world, but in 1969 this was probably pretty revolutionary.