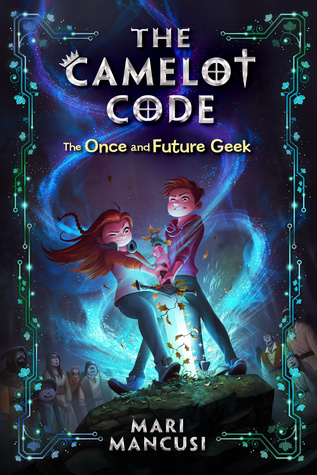 The Once and Future Geek (The Camelot Code #1) by Mari Mancusi
Published by Disney Hyperion on November 20, 2018
Genres: Fantasy, Middle Grade, Modern
Pages: 346

Young King Arthur accidentally time travels to the 21st century and googles himself, discovering the not-so-happily ever after in store for him once he pulls the sword from the stone. He decides he'd much rather stay here--and join the football team instead.Now modern day gamer geeks Sophie and Stu, with the help of Merlin, find themselves in a race against time to pull a Camelot-size caper--get that sword pulled from the stone and the stubborn once and future king back to the past where he belongs. While Arthur takes on the role of wide-receiver in an attempt to save the football team from a losing season, Sophie and Stu sword-fight, joust, and horseback ride their way through Camelot as they fight to save the timeline. If they fail, the world as they know it (not to mention the existence of pepperoni pizza!) will cease to exist forever.

The Once and Future Geek is a fun, fast frolic through time and space as the young protagonists try to keep history’s course steady. While the target audience is middle grade, and the writing and plot make that clear, even as an adult I enjoyed the story – especially since I’ve been a gamer (in another time, when I *had* many free hours in a day) and so many of the phrases and occurences in the story had me laughing and nodding because yes, that is indeed what happens when you play an MMO.

“I’d rather my heart be broken a thousand times than spend one day without her,” Arthur declared valiantly. Merlin groaned. “I seriously don’t know why I bother,” he muttered under his breath.

This is NOT your high fantasy King Arthur story. Don’t go looking for that, and you’ll probably be just as happy with it as I was. I love the banter between the various characters. I did think it was a little odd that the kids were just totally okay with Merlin lying to them at the very beginning…has no one ever told them creepy old men stalk kids online?!? But anyway…the story itself was entertaining, if a bit lacking on historical detail and high in artistic license. I sort of got a Percy Jackson meets Ready Player One vibe. All the family relationships and time switcheroos got a little confusing part way through the book, but then I got so interested in what was going on with Sophie’s parents that I didn’t care.

4/5 stars, minus a star due to some odd wordiness and events that I felt were a little too eye-rolling worthy even for the target audience. Also at the end the author clearly sounded like an adult trying to speak to children, or trying to sound LIKE a child, which irritates me to no end and I’m sure would be off-putting for a kid. Otherwise a really solid read and one I would love to add to my shelf! A refreshingly positive, upbeat take on the King Arthur legends.

I loved Sophie and Stu – their friendship, their geekiness, and their acceptance of each other and other people. Sophie’s attitude was awesome, and given that ending I really hope the series gets continued now that this reprint is out!

She was going to knock some sense into this little once and future twerp’s head if it was the last thing she did.

Tags: book review, middle grade, the camelot code, the once and future geek