I recently discovered author Annette Marie with the first book of her new series, Three Mages and a Margarita, and have started going through her back catalog. I’m so excited that she HAS an extensive backlist, as it seems a lot of the authors I really love are so new they only have two or three books. 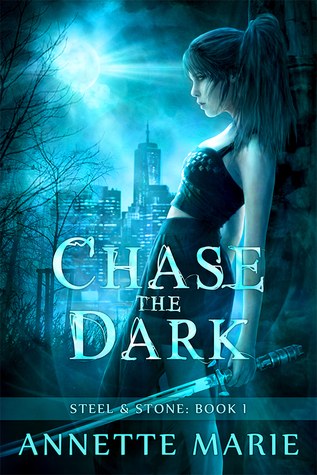 Piper Griffiths wants one thing in life: To become a Consul, a keeper of the peace between humans and daemons. There are three obstacles in her way.

The first is Lyre. Incubus. Hotter than hell and with a wicked streak to match. His greatest mission in life is to get Piper into bed and otherwise annoy the crap out of her. The second is Ash. Draconian. Powerful. Dangerous. He knows too much and reveals nothing. Also, disturbingly attractive — and scary. Did she mention scary?

The third is the Sahar Stone. Top secret magical weapon of mass destruction. Previously hidden in her Consulate until thieves broke in, went on a murder spree, and disappeared with the weapon.

And they left Piper to take the fall for their crimes.

Now she’s on the run, her dreams of becoming a Consul shattered and every daemon in the city gunning to kill her. She’s dead on her own, but there’s no one she can trust — no one except two entirely untrustworthy daemons ... See problems one and two.

Chase the Dark seemed to be the logical place to jump in after Three Mages, while I was waiting NOT so patiently for the next in that series (which I’ve since read, and a review is coming soon!). Also, the entire Steel & Stone series is available through Kindle Unlimited, which I happened to be trying for a free month. I hesitated slightly because in my experience, often an author’s first book or even first few books are not as good as their later works. I am thrilled to report that I was wrong, and I quite enjoyed the start to this storyline.

As with any fantasy, urban or otherwise, there’s a good deal of worldbuilding setup required in the initial book. Chase the Dark is set in a future earthworld that sees traffic from daemons of various “species,” most of which take on a humanoid form during the time they spend on earth. Piper, our main character, is in training to be a consul, a go-between for the daemon guests and earth’s diplomatic figures. It is, OF COURSE, frowned on for consuls to have any kind of personal relationships with daemons, regardless of their benevolent intentions…OF COURSE. *wink wink*

The story moves fast, as Piper, with Lyle – an on-so-alluring succubus – and Ash, an enigmatic draconian daemon (which is just as interesting as it sounds) – in tow has to make a run for her life and freedom after a horrifying attack on the human embassy erupts. Naturally, law enforcement jumps to conclusions about just who is behind the attack. Things snowball from there.

I love Piper. I love her backbone, her willingness to try ANYTHING to do what she perceives as her duty, and I love how she cares about people. She’s young, but not TOO young (I do think the YA label is somewhat misleading on this series…it felt more New Adult to me, but without some of the explicit sex scenes that a lot of NA books have). She has a lot of past hurts from her parents and relationship issues, but she keeps going, chasing her dream, despite the fact that she has a sizeable obstacle in her way. Piper is haemon – half human, half daemon – through a VERY interesting set of circumstances, and as such has none of the magical capabilities that haemons usually have. She hasn’t let this stop her though, instead training ten times harder than most in an effort to level the playing field. You. Go. Girl.

Somehow, Annette Marie has managed to avoid making this feel like a love triangle. I suppose it…sort of IS, regardless, but it just doesn’t feel like a typical one. Despite Lyle and Ash both being insanely hot and there being quite a few sexy scenes. The three of them are a team, and they work best when they are ALL together…it’s not only hot, it’s funny as hell. They all have their strengths and weaknesses. One of which involves spiders.

Piper went stiff as board. Ash crouched over her, a knee on either side of her as he craned to try and spot the insect. She bit her lip so hard she tasted blood…her muscles quivered. Give her minotaurs, sphinxes, anything but spiders.

I love that they do have weaknesses. Perfect characters are so unrealistic and unlikeable.

Though if you’re wondering, Ash was my favorite of the two guys. Because I love anti-heroes. He IS a real piece of work though…which is about all I can say without spoiling anything. Also, HE HAS A DRAGONET FOR A PET AND SHE IS THE MOST ADORABLE THING EVER. Ahem. I need a Zwi in my life. Ash does seem a little too emo at the beginning, but once they start running his seeming immaturity sort of evaporates. Again also, his refusal to show his real form at ANY costs is very VERY intriguing. What can I say, curiosity killed the cat. Some of the events at the end of the book involve him in a way that pretty much had my jaw on the floor…who IS Ash, exactly? And why does he have to be my favorite? I feel like he might end up the bad guy and I would absolutely HATE that…

SO MUCH HAPPENING. I find this is usually the case in the first of a fantasy series, because as mentioned before the entire world, etc., has to be set up. I was just more and more intrigued the longer this went on, and while a few things were explained in the end, it is really just a gigantic cliffhanger that left me gasping for air. I desperately need to read the rest, and plan to do so hopefully over winter break. Piper learns a lot about herself and her family that she never knew, and basically entire pieces of her life have been a fake or a lie. Yay overprotective parents.

Oh, and there’s a freaking amazing fight scene – because Piper can kick just about anyone’s ass, be they human or daemon – that is hot. AF. Just saying.

The world is basically our current earth with some technological upgrades and the addition of daemons from both an underworld and overworld. Very fascinating, especially since the good and evil distinction does not necessarily follow the under and over bit. I loved it. I hope the next books maybe actually let us GO to these other worlds.

There isn’t any actual sex, or even any real clothing removal. Just load and loads of sexual tension and some hot kissing. And the fight scene.

5/5 stars. If you like urban fantasy AT ALL, I would definitely give it a try!