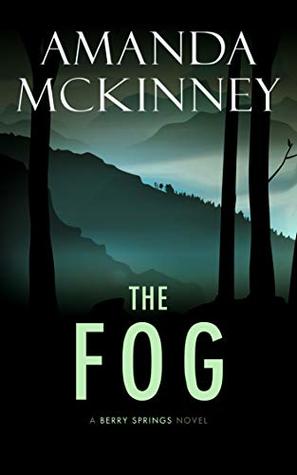 Former Marine turned ballistics expert, Wesley Cross is known around town for two things, his rugged good-looks and cocky attitude—until he finds his ex-girlfriend lying in a puddle of blood in his basement. The scene screams setup, but the discovery of a rare gem and a puzzling autopsy suggests the murder goes much deeper than that. Wesley will do whatever it takes to clear his name, including calling in a notoriously headstrong—and sexy—scientist.

While most little girls were playing dress up, Gwyneth Reece was digging in the dirt collecting bugs. Now one of the top forensic entomologists in the country, Gwen reluctantly accepts a job from a pushy cowboy and travels to the small, Southern town of Berry Springs. Heavy storms are brewing, and when she’s forced to check into the creepiest hotel she’s ever seen, she instantly regrets her decision to help out the former Marine.

The Fog is the 4th in the Berry Springs series by Amanda McKinney, and can be read as a standalone. I flew through this little novella (at 225 pages it makes for a quick afternoon or before bed read) and am considering picking up the other three at some point!

3.5/5 stars. This is an enjoyable, fast read if you want a little romantic action and a little suspense!

2.5/5 flames. There’s attraction and action, and Wes is great and all, (and I did LOVE that while he is very attracted to Gwyneth, she’s not described as having a supermodel body), but it just didn’t quite do it for me. They’re a cute couple but I guess I wanted MORE of them, more depth!

Award-winning author of romantic suspense and mystery, Amanda McKinney wrote her debut novel, LETHAL LEGACY, after walking away from her career to become a writer and stay-at-home mom. Set in small, Southern towns, Amanda’s books are page-turning murder mysteries peppered with steamy love scenes, and include the BERRY SPRINGS SERIES and the BLACK ROSE MYSTERY SERIES, with many more to come.