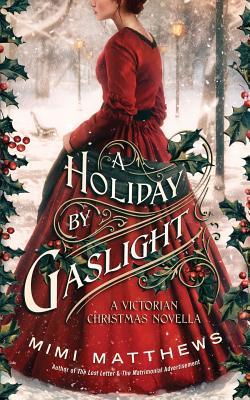 A Courtship of Convenience

Sophie Appersett is quite willing to marry outside of her class to ensure the survival of her family. But the darkly handsome Mr. Edward Sharpe is no run-of-the-mill London merchant. He's grim and silent. A man of little emotion--or perhaps no emotion at all. After two months of courtship, she's ready to put an end to things.

A Last Chance for Love

But severing ties with her taciturn beau isn't as straightforward as Sophie envisioned. Her parents are outraged. And then there's Charles Darwin, Prince Albert, and that dratted gaslight. What's a girl to do except invite Mr. Sharpe to Appersett House for Christmas and give him one last chance to win her? Only this time there'll be no false formality. This time they'll get to know each other for who they really are.

I saw this book and wanted it. Instantly. THAT COVER. Who doesn’t want to dress up in a sweeping, rich red gown with Christmas green trim? Clearly I was born in the wrong century. I had never heard of Mimi Matthews and while I am typically suspicious of historical romance books, my lovely experience with Someone to Trust made me willing to give this one a try as well.

The premise was intriguing enough – a woman willing to sacrifice her own happiness for her family, but only so far. Sophie has standards. She is more than fine frills and ballrooms. Mr. Ned Sharpe recognizes that almost at once upon meeting her. Before long he is head over heels – but will he ever find his tongue? Though very short, this story was absolutely delicious. I loved the science brought into it as the characters were discussing Darwin’s then-new theories, loved the descriptions of modernization, and I especially loved the major hat-tip to Elizabeth Gaskell’s North and South, which is one of my most loved classic books!

Sophie has just about given up on Mr. Sharpe, but in an effort to please her parents she makes one last ditch attempt to get to know him – just to know him! that’s all she wants! not even to be attracted to him! – and invites him AND his parents to her family’s Christmas party at their country estate. Given their aristocratic status and his family’s merchant background…things may not go as smoothly as could be hoped. But Sophie is determined to try to like the man who is willing to save her family from her father’s ill-advised spending, and what results is a lovely little romance that builds as the two come to understand each other better.

If you’re familiar with North and South, you will definitely see the similarity between Mr. Thornton and Mr. Sharpe, which wasn’t really all THAT obvious until the mother came into play. I loved it. It was sweet, and lovely, and can we have a full length novel with Sophie and Ned?

5/5 stars, because while there isn’t a whole lot here, it seems meticulously researched, the characters are alive and vibrant and seem ready to walk off the page, and, well, they’re just adorable somehow. Also snow and Christmas, because apparently I am ALL ABOUT the holiday cheer this season.