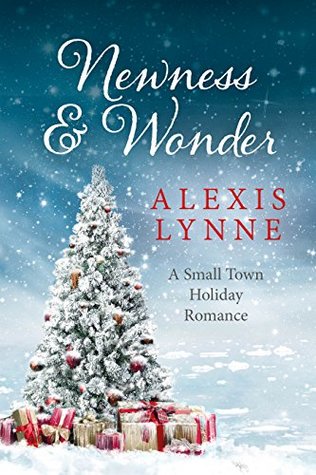 After her only dream is snatched from her grasp, can she open her heart to something new and wonderful this Christmas?

For years, all Tara Crowley longed for was to return to the simple but happy life she lived on her grandparents’ farm. After years of saving, she finally put an offer on the old place only to have it beaten by an out of towner whose plans for her childhood home are sketchy, at least in Tara’s mind. When she meets the man, however, nothing about him says villain, but will her disappointment and bitter past allow for a future with the one who stole all her dreams?

Justin Hunter gave up his life in Manhattan to give his young sister a childhood free of stress and complications. Fixing up the old farmhouse would give them a chance to bond and build the happy home neither of them ever had. When Justin meets a beautiful artist and loses his heart instantly, “complicated” becomes an understatement. Can he convince her to believe in a new dream, one that includes him and a young girl who needs her?

Spend the holidays in Sylvan Hills, North Carolina, where the scenery is beautiful, the people are quirky, and love finds you when you least expect it.

I was so excited for this novella! I felt like the plotline was going to be super relatable and cute, as I have for years been in love with my own grandparents’ farm that was sold out of the family a few years ago. Unfortunately, I couldn’t love this execution of the idea.

First of all, the dialogue is horribly stilted and not at all how people talk – especially not people from rural Appalachia! Not that I’m asking for an attempt at vernacular, but maybe just normal American style speaking? Especially in the first couple of chapters it’s as if the characters have never heard of contractions and the result is so awkward. I tried reading some of the dialogue out loud, wondering if maybe it was just my inward eye being judgy, but nope. It sounds just as bad out loud.

One of the redeeming features – and pretty much the ONLY reason I gave the story 3 stars instead of 2 – is Justin’s relationship with his much younger sister Marley, now under his guardianship. He clearly loves her and is trying SO HARD – too hard – to make up for all the deficiencies in her life both past and present. She is in many ways a typical pre-teen, and I loved her quirky interests and of course her love of books, and the way she tried to take care of Justin, too. Her and Tara’s relationship growth was really sweet, and her tendency to spout off zingers made me snicker a few times. Marley is awesome and I just wanted to scoop her up and give her all the books she could possibly want.

The romance was insta-lovey, but that’s to be expected in a novella. I thought Justin made for an attractive love interest for Tara but again the execution was just…not for me. He seems obsessed with kissing Tara’s hands, even within an hour of them meeting! Maybe I’m just overly sensitive to human contact, but I really don’t like people touching me and have a hard time relating to characters who do it or are ok with it within such a short time of meeting or knowing people. Then there were just some cringe-worthy lines that took all the heat out of the story in places.

Her skirt was short, her sweater tight, and the lighted reindeer antler headband nearly sent him over the edge.

Really. The lighted reindeer antler headband. Dude, what even. I couldn’t take any of their attraction seriously after that, and even the culminating scene fell flat. I was too distracted by picturing her wearing flashing antlers on her head, even though she wasn’t by that point.

Of course, these things won’t bother everyone, and the groundwork is laid for a couple more novellas in the series (Tara has two sisters who both obviously also deserve a HEA), so if the rural community and family farm storyline intrigue you, be sure to check it out.