Last of the Christmas book reviews! This was ALMOST my favorite, second only to The Christmas Sisters. 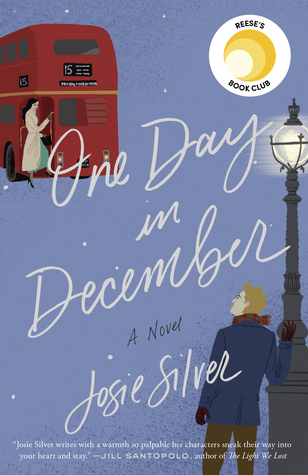 Laurie is pretty sure love at first sight doesn't exist anywhere but the movies. But then, through a misted-up bus window one snowy December day, she sees a man who she knows instantly is the one. Their eyes meet, there's a moment of pure magic...and then her bus drives away.

Certain they're fated to find each other again, Laurie spends a year scanning every bus stop and cafe in London for him. But she doesn't find him, not when it matters anyway. Instead they "reunite" at a Christmas party, when her best friend Sarah giddily introduces her new boyfriend to Laurie. It's Jack, the man from the bus. It would be.

What follows for Laurie, Sarah and Jack is ten years of friendship, heartbreak, missed opportunities, roads not taken, and destinies reconsidered. One Day in December is a joyous, heartwarming and immensely moving love story to escape into and a reminder that fate takes inexplicable turns along the route to happiness.

One Day in December was my local bookstore’s book club pick for December (the meeting of which I did not get to attend, to much sadness). I was a bit dismayed, to be honest, as I don’t typically read a lot of romance and often find myself too jaded and cynical to enjoy books with a heavy romantic focus. I am very happy to report that this book warmed even my crusty old heart!

While this book is, yes, a story of love, it is also a story of friendship. Laurie and Sarah have been best friends for years, and their friendship is really the glue that holds this book together. I loved them both, even if I definitely identified more with Laurie’s feelings and experiences. I’ve never been glamorous or someone who shines in the spotlight, so I was right there with her! The story spans 10 years from the time Laurie first spots her Mr. Right at a bus stop, and while Laurie and Sarah have their disagreements and even fights at times, they stick together through it all. Even when thousands of miles separate them! Again, having many long distance friendships, this really struck a chord with me. They aren’t all sunshine and roses, and Laurie really struggles sometimes with Sarah being in a relationship with Jack, but in the end she does the absolute best that a best friend could do and tries to be rational. After all, it’s pure silliness to think that you could be destined for someone you took a fancy to through the window of a bus…right?

Whoever the hell is in charge of TV scheduling needs a bullet between their eyes. Surely they could work out that anyone who needs to resort to watching TV on Valentine’s night is single and potentially bitter, so why they thought The Notebook would make suitable viewing is beyond me.

Despite the somewhat serious tone of the book – three young people seeking their own path in life as well as seeking for someone to share it with – there are moments of humor sprinkled throughout. More than once I giggled to myself while reading.

The storyline does move relatively fast, skipping over large chunks of each year and only coming back to “big” events or conversations. I was leery of that concept too, but it really seemed to work well for this type of growth in relationships and characters. All of the main characters grow, and growth includes some “mistakes” that are rather painful and costly at times. Some of the choices they made had me gasping in horror and feeling pains in my own heart, as again I just found them SO relatable (and in a couple of cases I’ve even walked the exact same path and could see the impending danger).

Jack starts off as a classic nice guy, goes through some shit and turns into a complete asshole. Not because that’s who he really is, but because he sinks into depression after a major accident and it completely changes his personality. He can see this, himself, but seems powerless to stop it. I found this to be a very accurate portrayal of how depression can wreck havoc on a person AND their relationships with other people – again, having been on both sides of that coin to some extent. Thankfully this was only temporary but it did leave his mark on him and the people around him.

I did have a couple little…bothers with this story. First of all, Jack lies to Laurie right from jump. It’s a little white lie, but it affects her more than he could possibly know and it just felt…bleh. And then, there is a certain THING that happens, that results in lies of omission that (naturally) create problems further down the road. It bothered me, and yet I can’t say what I would have done in the same circumstance would really have been any different. People make mistakes, and sometimes it is better for other people – people who might be hurt by the truth – to not find out. Sometimes. It’s such a gray area, which I guess was the point here.

5/5 stars. Overall I loved One Day in December because yes (as I have already said MANY times, I know), it was relatable for me, and because I felt it was so true to life. Life is messy. Sometimes life sucks. Relationships and love are EXTREMELY messy and often uncomfortable. But people and relationships ARE worth it! I loved that even after all the heartache and struggle, Laurie and Sarah and Jack all have hope and love in life, no matter how long they had to wait or look to find it. Sometimes the road to get to where we need to go is long, but life isn’t just about the destination.