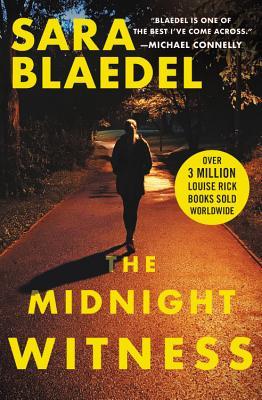 A young woman is found strangled in a park, and a male journalist has been killed in the backyard of the Royal Hotel in Copenhagen.

Detective Louise Rick is put on the case of the young girl, but very soon becomes entangled in solving the other homicide too when it turns out her best friend, journalist Camilla Lind, knew the murdered man. Louise tries to keep her friend from getting too involved, but Camilla's never been one to miss out on an interesting story. And this time, Camilla may have gone too far...

Emotionally riveting and filled with unexpected twists, THE MIDNIGHT WITNESS is a tour-de-force from international phenomenon Sara Blaedel.

The Midnight Witness pulled me in quickly and, barring anything totally off the wall happening, has hooked me for the remainder of this series. I had never read anything in the “nordic noir” genre so I was really eager to see how this would work for me, and it did not disappoint. I felt a kinship with Louise almost immediately, one adrenaline junkie to another.

Suddenly she felt it. All morning she’d been worried it wouldn’t show up.
The rush.
The energy came like a wave, a familiar feeling that usually came on at a crime scene. It was like an injection, adrenaline shooting up her body and into her chest, ending with her scalp prickling. She was ready.

Louise lives for the rush, but it’s a pleasant perk to her main goal of getting justice for the victims of crime and their families. I really liked the balance of focus on her job and the details of all the workings of the homicide unit with the time spent with her friend/family relationships. I think there was a lot of setup in this book, as in many first-in-a-series books, and we don’t get to see much of Louise’s back story at all so I’m hopeful that will come more in the sequels.

The story behind the murders here was less compelling than I really wanted it to be, and I was much more interested in the murder of the young woman in the park than that of the journalist. Still, about halfway through I started talking to the characters – a sure sign to myself that I’m invested in the story. I really enjoyed Louise and Camilla’s friendship, even while I wonder what kind of trouble a murder detective can get into by being friends with a reporter.

Whenever I read mysteries, I try to form a theory as early in the book as possible. I take notes so that I know exactly where I was in the book when I formed my idea of who-dun-it. My theory kept changing in this one – as soon as I would settle on one suspect, something else would happen and I’d be off on a rabbit trail again. It was great fun. I didn’t guess the true murderer until about 20 pages before it was revealed, so huge props to Blaedel on that.

4/5 stars. This is definitely different than most other mystery or thriller books I’ve read. It’s not a thriller – the pace is slower, and it’s less gory. There are SOME details of the murder but nothing too extreme. It’s also not a cozy mystery – too analytical for that. I guess it’s most similar to the Sherlock Holmes type detective novels, but it has more layers of personal relationships in it. I thoroughly enjoyed it.

The Louise Rick series and Sara Blaedel were brought to my attention by the awesome blog Crime By the Book, and I am so excited to have a new detective series to follow.