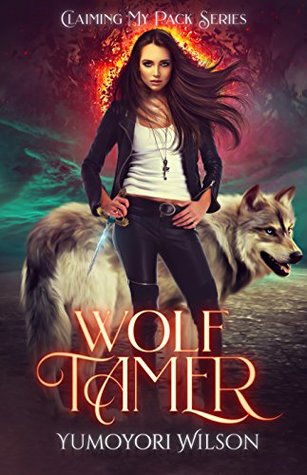 An Orphan Girl. A Group of Wolves. A Destined Fate for War.

Don't you ever wish to find where you belong? A place where you can rest your head without worrying about being jumped or your possessions being taken from you? Not like I had much, to say the least.

A pendant, an ancient blade, and a picture of my murdered family were all I had left when I was five years old. Foster homes to homeless shelters, I never found a place of refuge. I simply didn't belong, and everyone made it their duty to remind me of my predicament. Until I finally came across a place that felt like home.

Sacred Moon Shelter for Endangered Wolves. I'd stumbled upon the sanctuary when I was near death, but I was miraculously saved.

Since then, I've become a Wolf Tamer; the only one who can get close to touching the six rare breeds. When I'm with them, I feel safe and sometimes wish I could be like one of them and escape this cruel world.

But such inhumanity strikes home, a group of hunters shows up, ready to take my wolves to an unknown place or murder them in cold blood. I won't allow them to kill the only true family I'd ever known.

My name is Harper Blake, and I vow to claim and protect my own.

Warning: rant ahead. If you read this and liked it, click away now.

What. The fuck. Did I read. Seriously, I don’t think I even read the same book as the majority of reviewers on GoodReads, because this SOMEHOW has a 4.12 star average review. If you loved it, great. As I said before, click away.

Half a star for the cover art. It has beautiful cover art. IT LIES. This book sounds like it has a decent storyline, or at least the potential for it. Four flames for the sheer amount of gratuitous and graphic sex (that was not hot in the slightest, gag).

This book was absolutely horrible. HORRIBLE. I usually love shifter stories, and stories with strong female leads. But the writing, the characters, the plot (lack thereof?) was just…omg. Such a train wreck. I only finished because I did receive a copy for a review.

Harper and Ian are the most perfectly perfect people you’ve ever met. Physically they’re both a 15/10. Perfect bodies, perfect virgin sex (*gag*), and some of the most cringeworthy sex scenes I’ve ever read.

I guess the other reason Ian was protective was how “attractive” I’d become, according to others. Puberty hit me in the face at 14, and I went from 4’11 to 5’6 with the perfect set of breasts, hips, abs, and a “snatched” waist…I kept my brown hair nice and long, and it seemed to have the perfect shine that always caught the attention of the girls in town as to what shampoo, conditioner, and hair food I used on it daily…Now that I was sweet sixteen, I’d gained another four inches in height, and stood at 6’0. I doubted I’d get any taller at this point but I definitely didn’t look sixteen to most people anymore.

Ian spoiled me with clothing that was similar to his. We’d essentially caused a new “trend in town; young couples left and right tried to wear matching outfits and look lovey-dovey.

^I just threw up a little.

Oh, the sex. Harper is a virgin at the beginning, and she is “claimed” as Ian’s mate at the ripe old age of fourteen. She’s eighteen by the time they get around to having sex, and while I definitely wasn’t expecting any blushing-bride type scene, I do have SOME expectations and the writing for any of the sex scenes contained in this book just DID NOT DO IT FOR ME.

When he turned around though, my eyes immediately locked onto his length, and I kid you not, I could have fainted out of utter happiness. Ian was officially the whole package, right down to his damn length that I knew was longer than 6 inches.

Harper is also annoying AF, which is unfortunate since the book is mostly told from her first-person POV. For most of the book she’s 21-ish, and she is so incredibly full of herself it’s not even funny. I love confident female characters. But this went way beyond confidence into sheer arrogance and I really just wanted to slap her. Ian is just there for muscles and sex. He has the personality of a two by four.

What plot? Yes, there is this whole “wolf pack” thing going on at the rescue facility, and Harper has a strange bond with the wolves that stay there, as well as her own “internal wolf” that she won’t tell anyone (except Ian, natch) about, but really it just goes in circles with breaks for sex until about the last 10% of the book. Then there is a MASSIVE explosion of an info-dump with ALL OF THIS STUFF that was supposed to have been going on in the background. I felt cheated. There was no lead up, there were no hints along the way (so that at least you could look back and have the “aha” moment), nothing. Just, “Oh, this is how we’re going to explain all of this shit! And have some unicorns and glitter while you’re at it!”

I still have no clue about how the paranormal is supposed to fit into the world of this book. Is it accepted by the world at large? What kind of governing body is there? Who makes the rules? WHY are there shifters? Why is this particular pack so important? Where did they come from? The only one that is even PARTLY explained is the last question, which sort of starts to be answered at the end but you know, cliffhanger. That I don’t give one flying fuck about.

In the first few chapters, Harper is five years old and Ian is seven. They have full on adult style conversations that devolve into baby talk for a few minutes and then go right back to discussing how they’re going to educate themselves for the greater good. It’s ridiculous. Has the author ever even MET children?

1/5 stars because you can’t give zero. Never, ever ever ever going back to this series or author.