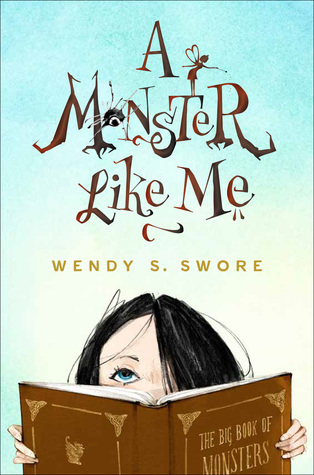 A Monster Like Me by Wendy Swore
Published by Shadow Mountain on March 5, 2019
Genres: Middle Grade, Modern
Pages: 304

Being the new kid at school is hard, but Sophie has a secret weapon: her vivid imagination and her oversized, trusted Big Book of Monsters--an encyclopedia of myths and legends from all over the world. The pictures and descriptions of the creatures in her book help her know which kids to watch out for--clearly the bullies are trolls and goblins--as well as how to avoid them. Though not everyone is hiding a monster inside; the nice next-door neighbor is probably a good witch, and Sophie's new best friend is obviously a good fairy.

Sophie is convinced she is a monster because of the "monster mark" on her face. At least that's what she calls it. The doctors call it a blood tumor, and it covers almost half of her face. Sophie can feel it pulsing with every beat of her heart. And if she's a monster on the outside, then she must be a monster on the inside, too. She knows that it's only a matter of time before the other kids, the doctors, and even her mom figure it out.

The Big Book of Monsters gives Sophie the idea that there might be a cure for her monster mark, but in order to make the magic work, she'll need to create a special necklace made from ordinary items--a feather, a shell, and a crystal--that Sophie believes are talismans. Once she's collected all the needed ingredients, she'll only have one chance to make a very special wish. If Sophie can't break the curse and become human again, her mom is probably going to leave--just like Dad did. Because who would want to live with a real monster?

Sophie thinks she’s a monster. She thinks a lot of people around her are monsters too, and she carries her Big Book of Monsters around almost everywhere she goes so that she can identify them and protect herself and her mom from them. The big birthmark – a hermangioma – that covers one side of her face makes kids and even adults stare and even make fun of her, and as a result she has severe social anxiety. Her world of monsters helps everything make sense. Until things start to change, and the bullying gets worse, and her monsters might just make her lose the only friend she’s ever had.

This was a fantastic book! Sophie is 11 years old, and the writing will appeal to kids that age and even a little older. The idea of Sophie so fully believing in the idea of people being monsters, will be a little more hard to go along with, but the book has a cast of loving, supportive adults that – while not hogging the page time – make it clear that Sophie’s way of dealing with the issues caused by her birthmark is not the healthiest way.

Autumn, a sweetheart of a girl at Sophie’s new school, is such a vivacious, loving friend to Sophie that she unwittingly opens an entire new world to her shy friend. Autumn’s grandmother, a gardener and herbalist, is another new friend that slowly draws Sophie out of her shell with gentleness and acceptance.

I really liked that Sophie’s mom was such a positive character. Even though she was far from perfect, she loved Sophie with all her heart and really, truly wanted the absolute best for her. In so many MG and YA books the parents are negative influences and I was happy to see a strong mother/daughter relationship.

4/5 stars. Strongly recommend for any kid and any library! Also worth noting: the author herself had a hermangioma as a child, and some of the incidents in the book came from her experiences.

Tags: a monster like me, book review, middle grade, own voices