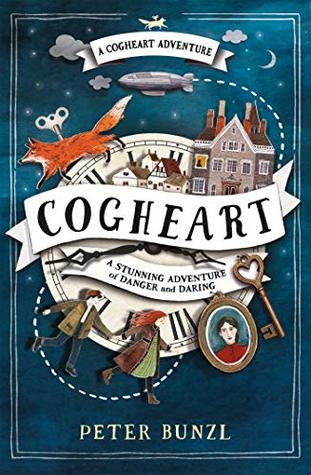 Some secrets change the world in a heartbeat. . . .

Lily’s life is in mortal peril. Her father is missing and now silver-eyed men stalk her through the shadows. What could they want from her?

With her friends—Robert, the clockmaker’s son, and Malkin, her mechanical fox—Lily is plunged into a murky and menacing world. Too soon Lily realizes that those she holds dear may be the very ones to break her heart. . . .

Murder, mayhem and mystery meet in this gripping Victorian adventure.

Cogheart is a tale with many moving pieces, not unlike the steam-punk mechanicals that Lily’s father builds. Unfortunately I think it’s a bit flat, as I never felt very attached to the characters. Also, for a middle grade novel, there is an awful lot of proverbializing and “lessons learned” sort of speeches, which I found annoying and am sure many of the target audience would as well. It also has a bit of a dark feel in some places, not unlike the Series of Unfortunate Events series – only these dark events don’t seem to have much effect on the characters except as plot devices.

Despite these flaws, I did finish the book and found the mech aspect interesting. I just have doubts about the book’s ability to hold the attention of a middle grade reader due to the issues I’ve mentioned.