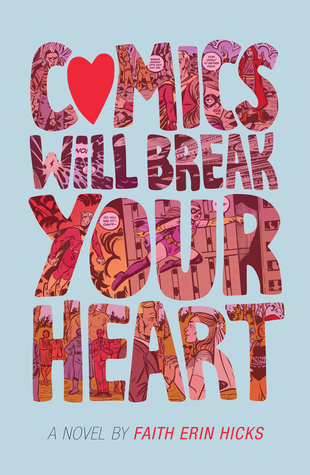 Miriam's family should be rich. After all, her grandfather was the co-creator of smash-hit comics series The TomorrowMen. But he sold his rights to the series to his co-creator in the 1960s for practically nothing, and now that's what Miriam has: practically nothing. And practically nothing to look forward to either-how can she afford college when her family can barely keep a roof above their heads? As if she didn't have enough to worry about, Miriam's life gets much more complicated when a cute boy shows up in town . . . and turns out to be the grandson of the man who defrauded Miriam's grandfather, and heir to the TomorrowMen fortune.

In her endearing debut novel, cartoonist Faith Erin Hicks pens a sensitive and funny Romeo and Juliet tale about modern romance, geek royalty, and what it takes to heal the long-festering scars of the past (Spoiler Alert: love).

Comics Will Break Your Heart was an adorable story with hattips to geeks of all kinds – from the greats of British literature to, obviously, comic book fans! The plot is loosely based on Romeo and Juliet, only the two families in question are descendents of patriarchs who together birthed one of the greatest comic book franchises of all time, only to have a bitter falling out.

Mir and Weldon are both likable characters, young people approaching the end of high school with the usual amount of trepidation and flailing about as they try to figure out their place in the world and what they want to do with their lives. They meet by sheer accident, when Weldon’s misbehavior prompts his high-powered, fame and fortune focused father to send him away for the summer, to his aunt and uncle’s house in the small town he has rarely seen. Despite his undercurrent of resentment and propensity for lying, Weldon is charismatic and charms just about everyone he meets. Mir has a work ethic to rival most adults, desperate to rise above her family’s extreme economy of existence. I liked that she didn’t seem embarrassed by her admittedly rather eccentric parents, but she knew that their choices were not going to be hers. I could understand her resentment of being forced to the extremes of frugal living – such as buying a second hand Monopoly and painting rocks to replace the missing pieces.

The cast of side characters was endearing too, even if I felt that their stories were left unfinished. I loved Mir’s friends Evan and Raleigh, and I hope maybe the author plans to write more about them at some point. Evan especially! He was just so sweet and kind and clearly cared so much about Mir. I really liked that even though he wanted to care about her in a more-than-friends way, when she said made it clear she wasn’t interested he completely dropped it, but remained a great friend. A lot of guys could take a lesson! 😛

The Romeo/Juliet plot was a little weak, mostly because of its predictability. The adults of the two families have had some hard feelings in the past, but their reasons for estrangement sound weak, especially the way Weldon’s aunt presents her case.

4/5 stars. I loved the descriptions of fandoms and comics, and Comic Con. It definitely appeals to the inner (and not so inner) nerd!