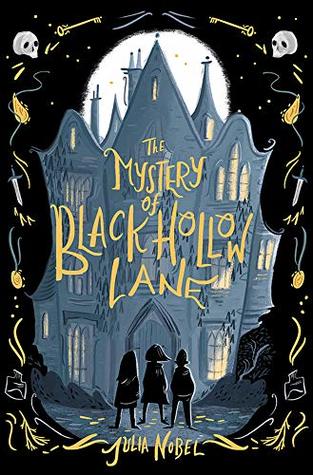 The first in an exciting new series, this suspenseful debut brings readers on a journey filled with secrets, mystery, and unforgettable characters.

With a dad who disappeared years ago and a mother who's a bit too busy to parent, Emmy is shipped off to Wellsworth, a prestigious boarding school in England, where she's sure she won't fit in.

But then she finds a box of mysterious medallions in the attic of her home—medallions that belonged to her father. Her father who may have gone to Wellsworth.

When she arrives at school, she finds the strange symbols from the medallions etched into walls and books, which leads Emmy and her new friends, Jack and Lola, to Wellsworth's secret society: The Order of Black Hollow Lane. Emmy can't help but think that the society had something to do with her dad's disappearance, and that there may be more than just dark secrets in the halls of Wellsworth...

The Mystery of Black Hollow Lane is the kind of book I would have LOVED reading as a nine or ten-year-old. It has strong, independent kids with their own unique voices, an intriguing mystery (that the adults are dead-bent on NOT being helpful with), and juuuuust enough creep factor to make a warm blanket desirable.

Emmy’s father disappeared when she was a toddler, and her mother is a “parenting expert” that is rarely around and emotionally distant even when she’s physically present. At the start of the story, Emmy is shipped off to a boarding school in England, despite having never been there in her life. Never one to remain down for long (however much her mother’s actions might hurt her), she acclimates quickly, making new friends with some of the more colorful characters at the school.

The mystery of Emmy’s father’s disappearance is a main theme, as she is (as many of us would be) desperate to find out anything about him, his life, and yes of course his disappearance. It was very intriguing to have all that thrown in with the typical school stuff (reminds me vaguely of Harry Potter here, considering the main friend group is also three people), and it seems the groundwork has been laid for future books in the series. Some questions were answered by the end, but even more were asked! I’m very eager to see when the next book will be released and what will happen to Emmy and her friends next.

I did wish there had been at least ONE adult who was straight with the kids, instead of constantly blowing them off or just trying to pretend things hadn’t happened. Children are smarter than we give them credit for, and often able to handle things much better than we might anticipate.