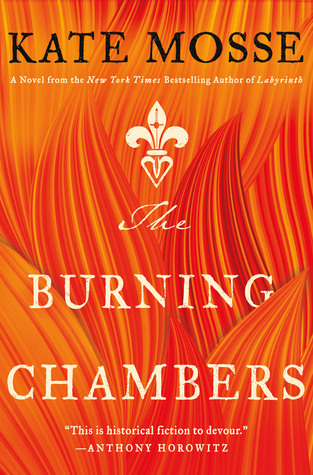 France, 1562: Nineteen-year-old Minou Joubert receives an anonymous letter at her father’s bookshop. Sealed with a distinctive family crest, it contains just five words: SHE KNOWS THAT YOU LIVE.

But before Minou can decipher the mysterious message, a chance encounter with a young Huguenot convert, Piet Reydon, changes her destiny forever. For Piet has a dangerous mission of his own, and he will need Minou’s help if he is to stay alive.

As the religious divide deepens, and old friends become enemies, Minou and Piet both find themselves trapped in Toulouse, facing new dangers as tensions ignite across the city.

All the while, the shadowy mistress of Puivert Château—obsessed with uncovering the secrets of a long-hidden document—strengthens her power and waits for the perfect time to strike...

“Kill them all. God will know His own.”

3.5/5 stars. The Burning Chambers is the first in Kate Mosse’s new series, set in a similar historical time period as her earlier series, but this time entirely in France during the bloody wars between French Huguenots and Catholics. This book started out reeeeeeeally slow. So slow that, had I not been given a review copy, I probably would have put it down indefinitely. However, the description was excellent and so was the writing, it was just…so much. Also SUCH a huge cast of characters! There was a three page list of characters at the very beginning (which honestly terrified me before I even started reading). A lot of focus was on the religious conflict, too, which I found kind of off-putting but I understand that it was a HUGE part of life at that time, and was the motivating factor for a lot of the characters’ actions. There was SO MUCH double-crossing in this story…it made my head spin at times, trying to figure out who was on what side and who was a spy and who was playing both sides!

The story is centered around Minou and to a lesser extent Piet, but there are so many chapters from such a variety of people it was rather mind boggling. Minou is great and I loved that she acted demure enough to blend in seamlessly in the current French society no matter where she was…but beneath all that “proper-ness” was a backbone of steel and GOD HELP ANYONE who tried to hurt her loved ones. Phew.

Piet is a good, steady man with a heart of gold and again the backbone of steel. Despite getting something of the short end of the stick in life, he is still unwilling to believe the worst of people (something that comes back to bite him in the behind). I liked him, but I wasn’t swooning over him. I guess I prefer more of the bad-boy/wounded hero type. He’s just too…nice? (What kind of a person does this thought make me…)

However, all that said, my favorite character was Minou’s little brother. HE is going to grow up to be just the sort of bad-boy-with-a-cause I can get behind, I just know it! The most INTERESTING character is actually the villainess, but the interest of spoilers I’ll leave it at that.

The Huguenots (Protestants) and the Catholics of 16th century France hate each other for various reasons, and those with no strong religious sensibilities want only to profit from war. Minou’s father has been keeping some dark family secret, Minou receives a vaguely threatening letter…and she is oblidged to leave her beloved Carcassonne for the “safety” of Toulouse, which turns out to not be safe at all.

I really thought this would be more of a historical thriller than it was. As it turned out it was much more of a political/social commentary for the first 75%, with a insta-love sort of romance thrown in. It was sweet, but seemed QUITE unfounded…however, ignoring that little issue, the last quarter of the book really picked up the pace and made me MUCH more invested in the characters and their story, as everyone actually came together instead of being scattered all across the map.

3.5/5 stars, rounded up. The last quarter really saved the book, and I’m hoping all the meandering and emphasis on the societal aspects of the Huguenot/Catholic wars was setup for the future books in the series, which I will definitely be reading!